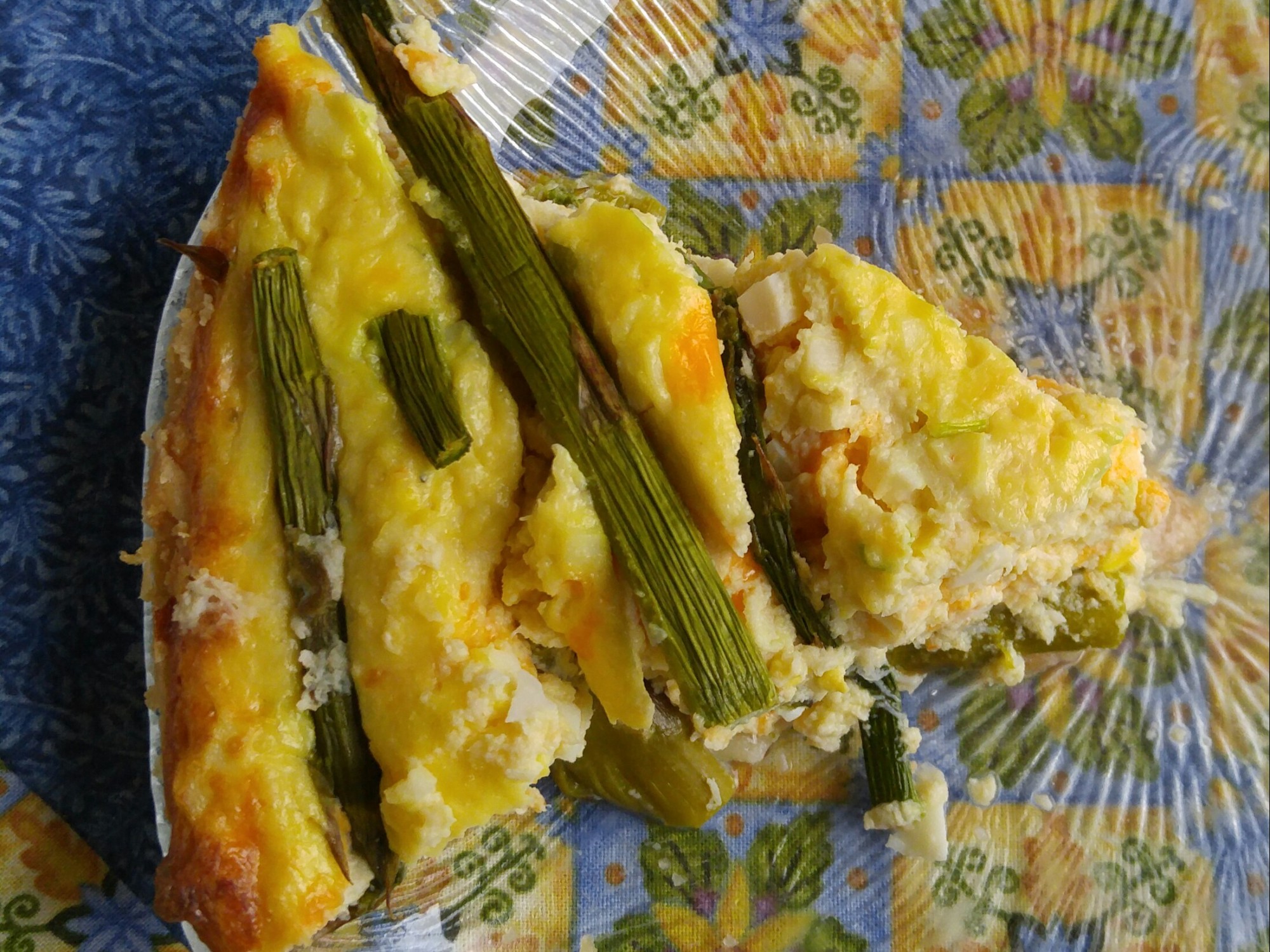 Time for Quiche #2. Since the first one went so well (and the premade pie crusts come in packages of two) I thought I’d try another quiche! This recipe works nicely for my pescatarian parents (aka vegetarian + fish and seafood) and I was excited to make it because crab was always a special treat in our house.

I found this recipe in a Company’s Coming book called Make-Ahead Meals. (Side note, my mom has about a thousand Company’s Coming recipe books by Jean Paré, so you know it’s quality stuff.) Here is a similar recipe to the one I used.

This recipe does take a bit of time but it is fairly simple to make, once you get the ingredients straight. The first ingredient is canned asparagus. I didn’t read the recipe carefully and bought fresh (which is probably better anyway). The next ingredient is canned crab that’s been drained and had the cartilage removed. I had no idea what the cartilage was and the recipe offered no other explanation. I tried a Google search, but that mostly just gave results on extracting the meat from an actual crab. I was thinking, “What is the cartilage? Isn’t that a part of your ear you can get pierced?” So I texted my mom and she told me it was the bone. Why didn’t you just say that, Jean? Anyway, I didn’t find any bone, and we didn’t have any crunchy bits in the quiche so I think we’re good.

The rest of the ingredients were pretty straightforward. This recipe did call for hardboiled eggs as well as raw eggs, I don’t know why, but it does. I already had hardboiled eggs, because I like them with my breakfast, but if you don’t, this is some extra prep work. The recipe also called for celery, but I skipped it because celery is gross. Finally, one of the other ingredients is mayonnaise, which I ran out of, so it was about half mayo and half sour cream.

The one thing I didn’t plan for (besides the crab confusion and the mayo) was the amount of cooking time needed. It needs 30 minutes at one temperature and then another 45 minutes at a slightly lower temperature. This is another thing to plan for. As the title of the book suggests, you can make the meal ahead of time and simply cook it when you’re ready, but the cooking does take a while.

After all that, we ate the quiche and it was quite tasty! The asparagus and the crab go very well together. The only thing was, it was very watery in the base of the pie, I don’t know if that’s normal, but maybe it was because I forgot to pile holes in the bottom of the pie crust, or maybe it was the sour cream or something. I don’t know if I’ll make this recipe again. It was good but it wasn’t amazing or anything. I might find a recipe that uses fresh crab instead.