Here is a quick summary of the day so you can skip ahead to the pictures and not read my ridiculously long post: 4 AM sunrise, Dürüm, East German Uniform, Holocaust Memorial, Brandenburg Gate, Canadian Embassy, cool architecture, symphony.

This morning I left my place at 4am so I could get to the airport on time for my 7 am flight. The first thing I noticed was that Copenhagen at 4 am is very different than Southern Ontario at 4 am. The sun rises so early here, it’s ridiculous! 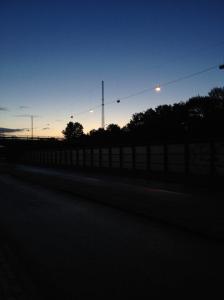 I discovered that the metro here (which is the 2-carriage version of subway trains) has stickers on the windowsill of the windshield so kids could “control” the train.

In the airport, as you would expect, it was not very busy at 5 am, so I was able to get through security smoothly and enjoy breakfast overlooking the airstrip.

I also discovered there’s a Lego store in the Copenhagen airport, which, frankly, does not surprise me.

After a short flight, I arrived in Berlin and caught a bus to Hauptbahnhof where I met up with Lindsay, who is on exchange in Germany. This station also has a statue dedicated to Ritter Sport chocolate bars. 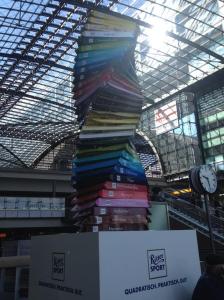 After checking into the hostel, we started wondering what to do first. We had an idea of what sites we wanted to see, but no plans, which can be a fun way of seeing a city. You don’t have many expectations, so it’s easier to enjoy a city without having romanticized it in your head. I was really looking forward to seeing more of Germany, since it makes up half of my heritage. I had only been in Germany for 2 days in January, most of which was spent on a bus.

We started by finding lunch. Both of us had heard that German Shawarma, or Dürüm, is delicious, so we went and found a place recommended by one of Lindsay’s friends in Canada. It was called Mustafa’s Gemuese and it was a simple food stand just outside one of the subway station. We knew it was going to be good because there was a huge lineup! We waited for probably around 20 minutes and the Dürüm was delicious! I’m not one for spicy food, but this was great and had just the right amount of kick for me.

After this, we made our way through the Berlin train system to Postdamer Platz, where many iconic landmarks are located. We quickly learned that we are terrible navigators of the train system. We got repeatedly disoriented and always had a map on hand to figure out which of the dozens of trains we needed. At one point we needed to get off at Alexanderplatz, and we thought we had arrived but it turned out we were in the station right before Alexanderplatz. So we had to sit around and wait for the next train and observe the random sculptures on the train platform, which looks like the pilgrim version of totem poles.

The first thing we saw in the square was a giant inflated soccer ball, because I think Berlin was hosting some football tournament. A couple of girls asked us to take their picture in front of it and we could tell they were North American, so we asked where they were from and it turned out to be Winnipeg! We chatted with them for a while learned about their travels across Europe and we talked about the traveling we had done. It was nice to see more Canadians in Europe, especially since I’ve met no other Canadian exchange students in Copenhagen.

The next stop was the Berlin Wall memorial. This had six segments of the original wall along with some plaques talking about the history of the wall. Along the same line as the wall segments was a line of bricks which show where the Wall actually stood across the entire city. It’s hard to believe what was is now a central part of Berlin was once separated by a 14 foot wall and something like no-man’s-land on the East Germany side.

There was a man standing at the wall in a uniform holding a flag. He told us a little bit about his costume and the place where we were standing, that this was the East German side and that he was wearing a traditional uniform and we were welcome to take pictures with him for charity. So we did and it was lots of fun. He even gave us copies of 20 Deutsche Marks. (Street artists in Europe usually ask for money if you take a picture with them, so I was glad to see this was going to charity).

A couple blocks from this was the Holocaust Memorial. Looking at it with no context, you’d have no idea it’s a memorial. It takes up the entire square and it’s a series of rectangular cement blocks increasing in size as you approach the center of the square. The blocks are all the same length and width with the same amount of space between them.  According to the artist, they are “are designed to produce an uneasy, confusing atmosphere, and the whole sculpture aims to represent a supposedly ordered system that has lost touch with human reason”, which you know is true once you walk through them. As the blocks get taller and taller, you see less and less of the surrounding area. It shows a feeling of hopelessness and no way out. The other interesting part is that the memorial is right in the middle of bustle and tourism of downtown Berlin. People can walk by without knowing what it is, and I think that is very interesting and a bit poetic. I think it was a really interesting and emotionally/symbolically accurate depiction. It’s a worthy memorial to those who endured the holocaust. 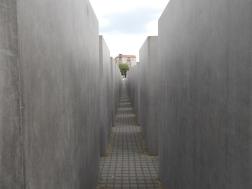 Right next to the memorial was the iconic Brandenburg gate! It was very grand and German. That’s all I know about it. 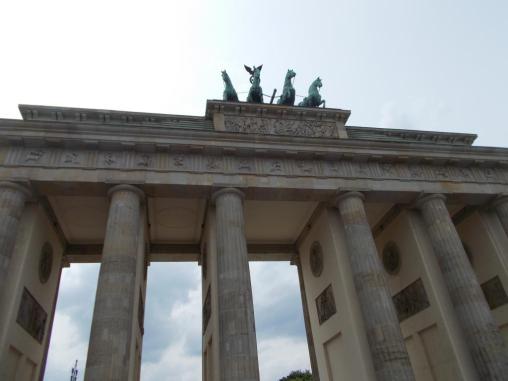 On our way back to the train station, we went into the Canadian embassy. We weren’t sure if we were allowed in because there was a security guard inside, but he saw us standing there awkwardly and invited us in! We chatted with some of the people there, who were all really friendly (because Canada). And we played a Canadian trivia game meant for German school children and Lindsay translated it for me. The people there talked to us about Canada and hockey and how other countries are as big on hockey, mainly because they aren’t as good at it, except Russia. Apparently on Fridays the Embassy is open to the public, which is so Canadian. 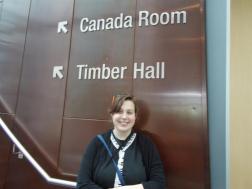 Next stop was this cool mall-type building called the Sony Center. The architecture in there was really modern and impressive!

While at the Sony Center we wandered around and found the Philharmonie and decided on the spot to see the Berlin Philharmonic tonight! So we grabbed dinner at McDonald’s/Subway (because we’re that classy), didn’t bother to change because I felt my outfit (of jeans and a piano tie t-shirt) already suited a symphony show, then listened to the symphony. They were fantastic! If you know me, you know I love music, so I had a great time! They played a symphony by Beethoven (String Quartet in F minor), then a piece by Schostakowitsch (String Quartet in A flat major), and then another Beethoven piece (String Quartet in E flat major). The Schostakowitsch was a little bit wacky. They would be playing something somewhat serious then suddenly change to the William Tell Overture theme. It was lots of fun! The other funny thing about going to the symphony which is they only applaud at the end of each set. They do not applaud between pieces. Whenever my friends and I see the Kitchener-Waterloo symphony, you applaud after every piece. But no, instead everyone lets out the coughs they’ve been holding in. I’m not kidding: everyone coughs! I’m also not kidding when I say we were randomly given free throat lozenges when walking into the symphony building!

This made me really hope they would use the organ!

We finished off the night by checking out the Sony Center all lit up at night, then went back to the hostel. 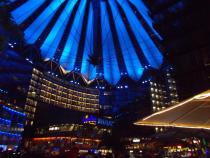 Lindsay imitating the guy on the sticker on the fountain

Definitely the city tour with the most variety I’ve ever done!